Responding to protesters’ sound bites on executive orders, or ‘Why I voted yes.’ 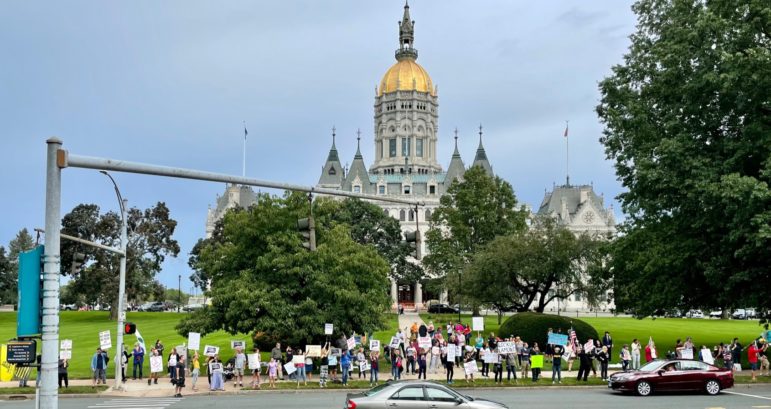 Protesters outside the Capitol on Monday.

Like 79 of my House colleagues, I voted Monday in Special Session to extend the governor’s executive orders to help control the pandemic here in Connecticut. In the weeks leading up to the session, the anti-mask movement was very vocal. But it wasn’t very original.

Reading my recent emails, it doesn’t take long to see a pattern; certain glib, sound-bite-ready statements were repeated constantly by people across the state. And whether each writer honestly believed that he/she/they were the only ones with this insight, or the writers deliberately sent the same message in an effort to make it true through repetition, it’s time to parse each of these statements and respond to those who are no doubt fuming over the vote.

Those of us in elected office feel anything but powerful right now. We are trying our best to keep people safe, keep businesses open, and keep children in school. Using our vote is what we were charged to do when you elected us. And we voted to give the Executive Branch leeway in taking commonsense steps to preventing more Covid deaths.

“King Ned Lamont is a dictator.”

I believe the governor is an honorable man doing an excellent job guiding Connecticut away from the rocks other states are crashing right into. For the record, I do not always see eye-to-eye with Gov. Lamont (I wish he’d agree with the Progressives’ call to make the uber-wealthy pay their fair share, for example) but he works extremely hard doing a nearly impossible job on behalf of the citizens of our state. It is important to note that of the 114 original executive orders, only 12 remain, and that during the last legislative session, we voted to give legislative leaders the power to override his orders, should we feel any of them were excessive. Hardly dictatorial.

This is a grave insult to everyone who fought real Nazis, to Jews, and to others persecuted by Nazis, including Catholics, intellectuals, artists, and LGBTQ folks. It is just shameful to compare wearing a mask to wearing a yellow star.

“You need to get back to work.”

I can’t speak for my colleagues across the aisle who aid and abet anti-maskers, but I’ve never worked harder in my life. Helping people through covid with unemployment compensation, business loans, ensuring safe ways to vote, rent relief and landlord/tenant arrangements, and the quotidian, every day needs of people who are really hurting, is a non-stop prospect. If they aren’t hard at work, too, I wonder why.

As a pro-choice feminist, I object to the hijacking of this phrase by the anti-mask movement, many of whose members do not defend a woman’s bodily autonomy. And many of the legislators now espousing this mantra have a history of anti-choice votes.

“The Constitution guarantees my right to refuse to wear masks.”

Folks are fond of quoting the Preamble to the Constitution, but they are conveniently skipping over the meaning of some key words, which I have put in bold type:

“We the People of the United States, in Order to form a more perfect Union, establish Justice, insure domestic Tranquillity, provide for the common defense, promote the general welfare, and secure the Blessings of Liberty to ourselves and our Posterity, do ordain and establish this Constitution for the United States.”

In other words, the Constitution exists for all of us, not those who would put their own freedom and safety before everyone else’s. And public health mandates have a long history in America. George Washington made his troops get vaccinated against smallpox, for example.

“The people have spoken.”

Yes, they have. Between 80 and 90 percent of Americans believe in wearing masks.  Just because one group squawks louder than others doesn’t mean they represent the majority.

“Our children are not your political pawns.”

That’s right. And nor are they yours. Trotting them out like show ponies to serve your own political ends is abhorrent. Children are innately sensible, compassionate and open-minded, unless these traits are bred out of them by anti-mask parents ginned up on faux Fox…

Read More: Responding to protesters’ sound bites on executive orders, or ‘Why I voted yes.’

Treasures: Vernis Martin cabinet an elegant find despite its…

Taliban Seize Women’s Ministry Building for Use by Religious…

Live: Blinken Is Grilled on Afghanistan in Congress