One word shakes the markets, causing a lot of fear: stagflation.

Is it coming? Will it push out from stagnation? Let’s find out.

One of the greatest risks cited currently by the markets is stagflation. The term means a situation in which there is high inflation and stagnation at the same time. So far, we have only had high inflation (CPI annual rate has soared 5.4%, and almost 5% if we take the quarterly average), but some analysts believe that inflation has already peaked. However, the economic growth is fast (the GDP surged 12% in Q2 2021 year-over-year), as the chart below shows. So, why bother? 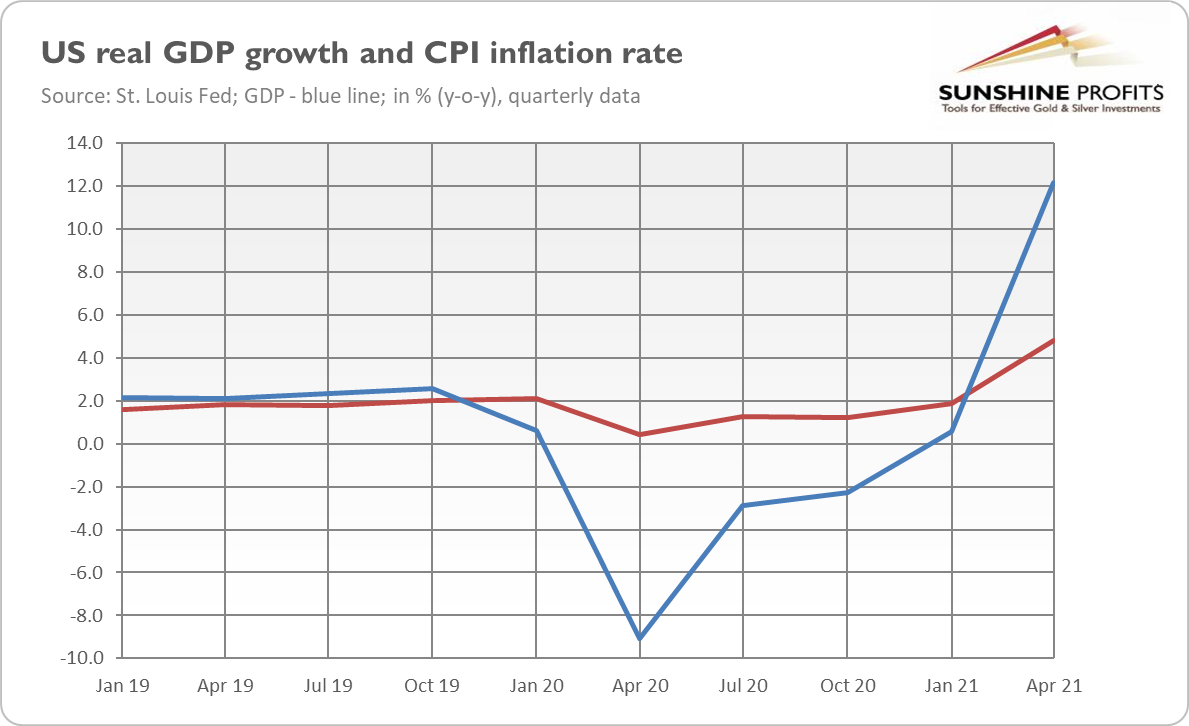 Well, although a recession is not lurking around the corner, slowing economic momentum quite clearly is. The GDP growth for the second quarter (although impressive) came below expectations, the consumer confidence declined and, more generally, the index of U.S. data surprises has recently turned negative.

Among negative surprises, is the decline in by 1.1% in July, which was worse than expected (0.3%) and the drop in the New York Fed’s Empire Manufacturing Index from 43.0 in July to 18.3 in August, much below the expected 29.0. So, the recent decline in the bond yields may not be as nonsensical as it may seem.

I warned my readers a long time ago that the recovery from the pandemic would be spectacular but short-lived and caused mainly by last year’s low base. If you lock the economy, it plunges; when you open it, it soars, simple as that. Now, the harsh reality steps in, and it’s yet to be seen how the U.S. economy will perform in a post-pandemic reality with the spreading Delta variant of the coronavirus, a slowdown in China’s economy, and without government stimulus.

When it comes to the price front, it’s also highly uncertain. Inflation has softened a bit in July, but it remains high, and I’m afraid that it could prove to be more persistent than it’s believed by the Fed and some analysts. The latest Empire Index, mentioned above, tells us: although the index of manufacturing activity fell more than expected, the inflationary pressure strengthened. As the report says, “input prices continued to rise sharply, and the pace of selling price increases set another record.”

What’s disturbing in all this – and this is why inflation may stay with us for longer – is that the Fed is downplaying the inflation risk. And even monetary policy 101 says that the best way of preventing inflation is acting early as inflation pressure builds up. Friedrich Hayek, a great economist and a Nobel Laureate, once compared taming inflation to catching a tiger by the tail – it’s not an easy task when the cat has already escaped the cage. The problem is that when central bankers wait to see the whites of the inflationary tiger’s eyes before acting, it’s already too late. If you stare at the tiger in the eyeballs, you will probably to be eaten soon – unless you hike interest rates abruptly, choking economic growth off.

Going into specifics, the Fed’s view that inflation is transitory mainly rests on the belief that price increases are caused by supply disruptions related to the pandemic. However, inflation is not limited to just a few feverish components — it’s broad-based. In particular, the cost for shelter, the largest component of the CPI, has also been gradually rising, even though the owner’s equivalent rent component doesn’t reflect properly the recent record surge in U.S. home prices (see the chart below). If this is not inflation, I don’t know what is! 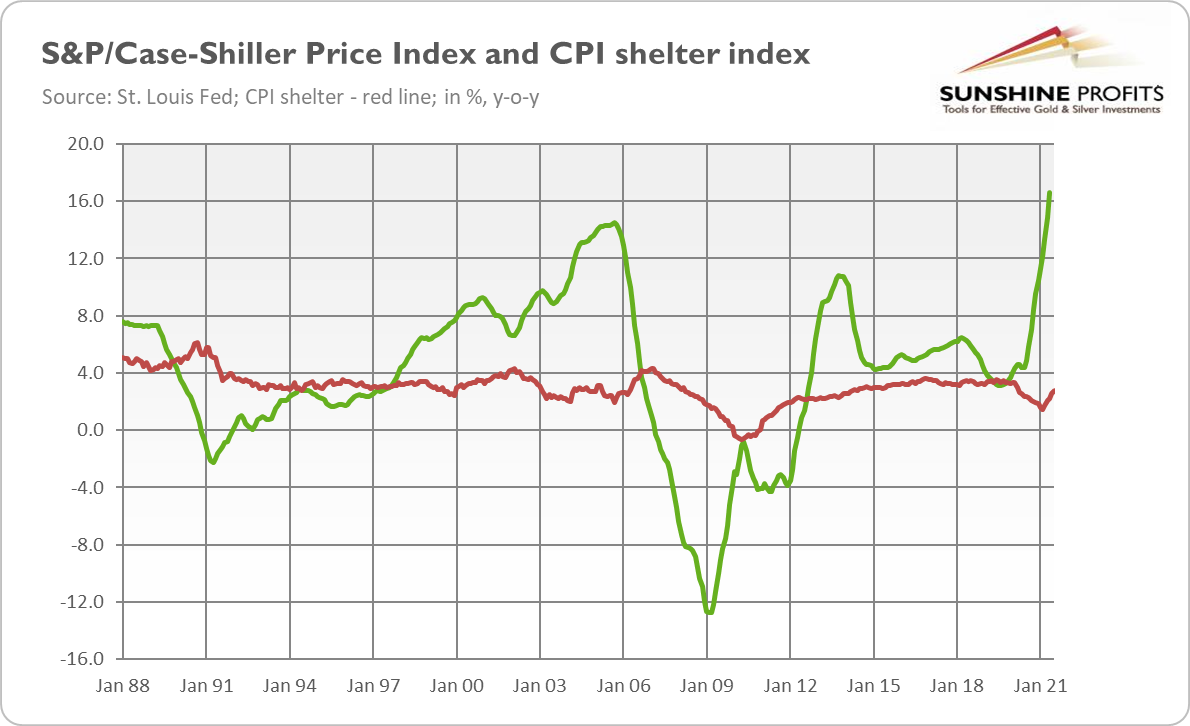 The increase in house prices is important here, as Gita Gopinath, chief economist and director of the IMF Research Department, admitted at the end of July: “More persistent supply disruptions and sharply rising housing prices are some of the factors that could lead to persistently high inflation.”

What does it all mean for the gold market? Well, stagflation should be negative for almost all assets. When we have a stagnant economy coupled with high inflation, stocks and bonds are selling off together. In such an environment gold shines, as it is a safe haven uncorrelated with other assets.

Stagflation is so terrifying because the Fed won’t be able to rescue Wall Street simply by cutting interest rates, as it could only add fuel to the inflation fire. The only viable solution would be to engineer another ‘Volcker moment’ and tighten monetary policy decisively to combat inflation. Given that debts are much higher than in the 1970s and some analysts even point to a debt trap, it could put the economy into a severe economic crisis. So far, investors seem not to worry about high inflation, but just as things go well until they don’t, investors are relaxed until they aren’t. For all these reasons, it seems smart to own such

Gold is not the best inflation hedge, these assets are better –…

XAU/USD to struggle to see a sustained break above $1,800